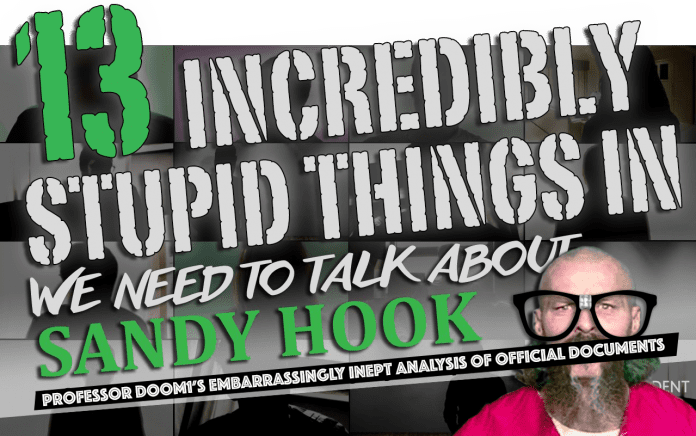 Sandy Hook HOAXER Professor Doom1 is not a “documents expert” as claimed!

13 INCREDIBLY STUPID THINGS IN WE NEED TO TALK ABOUT SANDY HOOK: #4

Professor Doom‘s analysis of official documents is emabarrassingly inept. We’ll get to the embarrassment later. First, let’s hear him out…

Well? He is looking at the actual case file, so I like him so far. Better than some people I can name from this “documentary.” So we’ll give Professor Doom a point. Alright, you were saying?

“And… in this report here… it goes on to state thus: The shooter’s schooling began at Sandy Hook Elementary School.” – Professor Doom1 YouTube Hoaxer

Alright, I’m deducting a point. And that’s for distorting the truth. In fact, I’m deducting the entire point system because you distorted the truth when the truth was clearly visible at the time you tried to distort it. The full explanation reads: 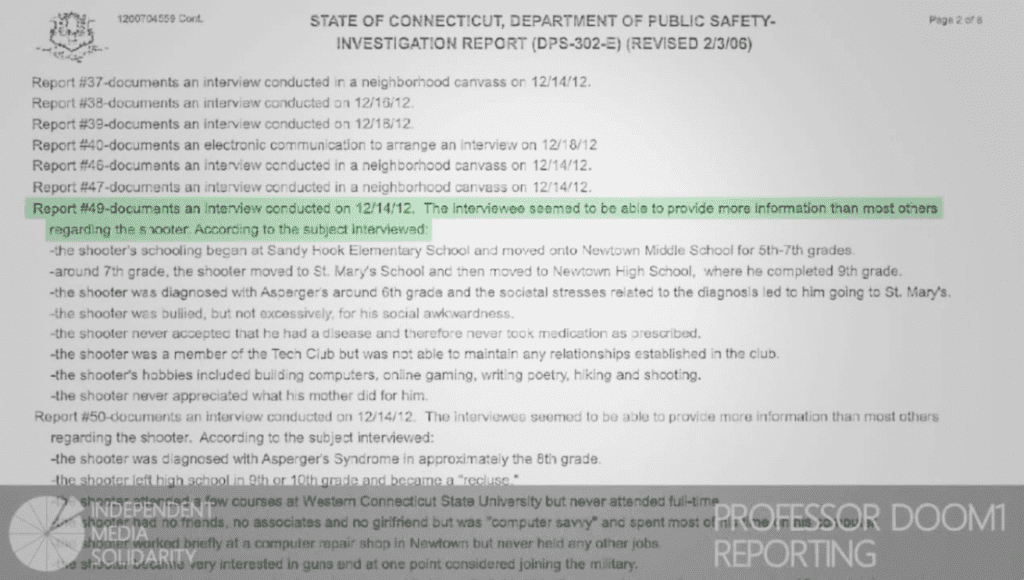 “Report #49 – documents and interview conducted on December 14, 2012. The interviewee seemed to be able to provide more information than most others, regarding the shooter – according to the subject interviewed…”

Compare that context with the misrepresentation Professor Doom uses to introduce the same information.

“It” (being the official report) does not say that here. It says very clearly, that an interview subject on the day of the shooting at Sandy Hook seemed to be able to tell more than most people regarding the shooter. It does not, and I cannot emphasize this distinction enough, it does not say that this information provided by the witness is to be considered accurate, nor exhaustive.

These are serious investigators. They are not going to rely upon on-the-spot recollections from one person to establish a concrete timeline of the shooters education… a decade after it actually took place! No responsible person would do that. Professor Doom does that. In fact, it’s the entire basis for his argument – except for the fact that he actually never makes an argument.

It’s apparent that Mr. Doom has a respect for the general concept of a document. The word itself, “document,” seems to convey expertise to him. And thus, expertise from him when he says the word… “document.” I suspect that’s why he says it so many times.

The police have a responsibility to track down actual records and compare them to witness statements. Both are “documents,” but they’re not the same thing. And indeed, the next file that Professor Doom shows is evidence the authorities did their due diligence in verifying these sorts of claims, the opposite of which Professor Doom does, which is to use witness statements to indirectly imply that verifying records are somehow false.

In this shortened clip from “13 Incredibly Stupid Things in We Need to Talk About Sandy Hook” I detail how everything ProfessorDoom says in the film is demonstrably incorrect and ridiculous.

In the original version of this clip I also held him responsible for his appeals to his own authority, but there has been so much whining and gnashing of teeth about it from the hoaxer community that I’ve decided to upload this simpler version for easier digestion. 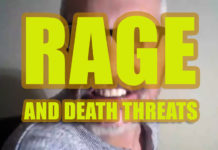 Professor Doom1 Will Always Be a Criminal – MORE DEATH THREATS!