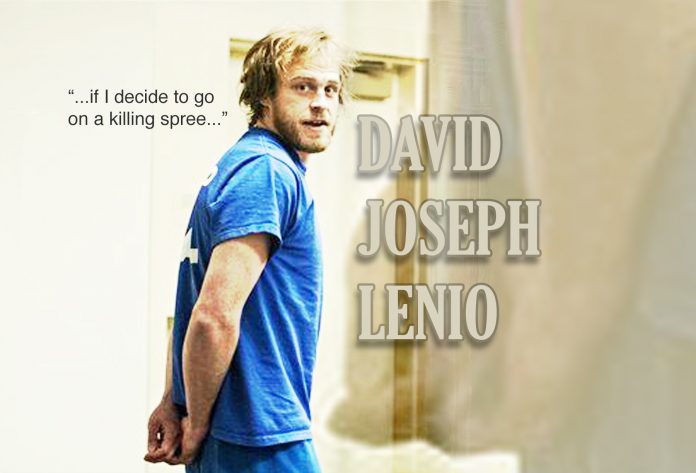 The Tweets of a Jailbird, David Joseph Lenio

“I David Lenio,” he wrote, “am literally so indebted & #underpaid that I want to go on a Sandy Hoax Style spree in a Kalispell, MT elementary #school!”

David Joseph Lenio… what else can be said or written about the twisted Hoaxer looking for attention? Lenio poses as PsychicDogTalk Radio on Twitter, an account he created in hopes of gaining support for the oppressed, yet privileged. Tweets sent out from the PsychicDogTalk Radio would have one believing Lenio is a dirt-poor dirtbag with a lousy education. On the contrary. David Joseph Lenio is a man with power and prestigious people who have his back… mainly, his very wealthy and influential father.

I’m not even opposed to shooting up a random school like that sandy hoax stunt only realer, to voice my displeasure with being a wage slave.

I bet I’d take out at least a whole #classroom & score 30+ if I put my mind to it. #Poverty is making me want to kill folks #MentalHealth?

The tweets also criticized Jewish political beliefs and David Joseph Lenio hoped killings would drive Jews out of the country. Lenio also said, “If I ever went on a killing spree, I would first shoot a rabbi or a Jewish leader.”

The tweets about school violence did not mention specific schools, according to police in Kalispell, the northern Montana city Lenio moved to less than two months ago. 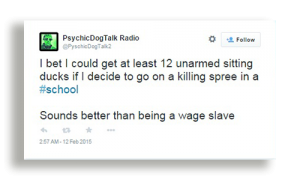 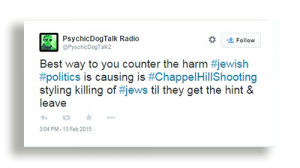 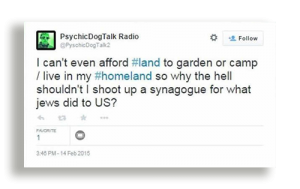 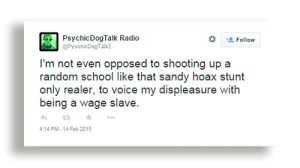 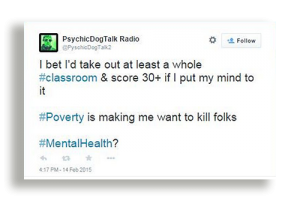 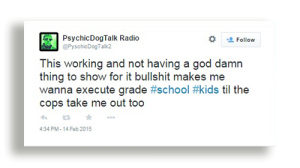 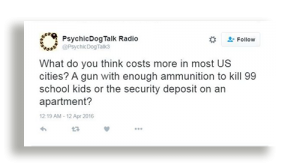 Lenio was arrested on Feb. 24 in Grand Rapids, Michigan and charged with felony stalking, felony use of a computer to commit a crime and misdemeanor malicious use of telecommunications services. Lenio pleaded not guilty to all three charges at an arraignment on Feb. 27 in the 61st District Court in Kent County. According to court documents, Lenio had been harassing Jonathan Hutson, a Maryland man who first discovered Lenio’s threatening Twitter messages in early 2015.

An officer talked to Lenio’s roommate, who said Lenio had brought rifles and ammunition to their home the night before, according to authorities. Police obtained a search warrant for Lenio’s apartment and found a 9mm semiautomatic and a Russian-made bolt-action rifle in his bedroom. They also found numerous rounds of ammunition in Lenio’s bedroom and basement. Later, officers conducted a search of Lenio’s vehicle and found a .32 caliber semiautomatic pistol and more ammunition. They also discovered marijuana, a pipe and jugs of urine.

Lenio arrested as he was coming back from snowboarding

Lenio was charged in Flathead County District Court with intimidation and criminal defamation, both felonies. He pleaded not guilty to the charges soon after his arrest. He spent five months in the Flathead County Detention Center before being released into the custody of his family in Michigan. In March 2016, prosecutors dropped the charges against Lenio so long as he stayed out of legal trouble for two years. As part of the deferred prosecution agreement, the Flathead County Attorney’s Office has the ability to reopen the case and charge Lenio again.

Lenio had been sending out harassing and threatening tweets on Twitter aimed at a couple of people in particular. Numerous Twitter accounts have since been shut down for violating the website’s terms of service. A deferred prosecution agreement was filed in 2016 because it was believed that Lenio posed a real threat to the community.

Hopefully, the justice system will work this time and hopefully Lenio will finally receive the mental healthcare which he apparently needs. 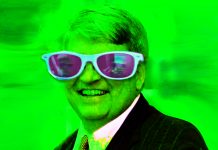 The Making of ‘A Potential Terrorist’ – Son of Remos Joseph Lenio

The Making of ‘A Potential Terrorist’ – Son of Remos Joseph...