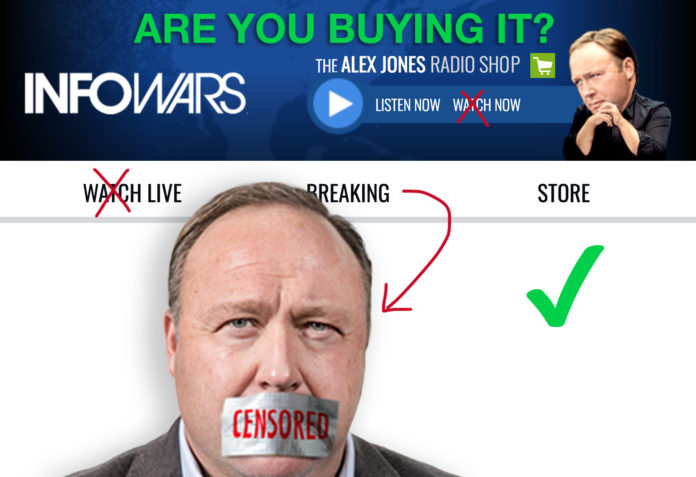 A full 24 hours has passed since Alex Jones of InfoWARS was booted off the many social networking platforms that helped make Jones and company a household name. Sites were set for stun and said, “enough of your hate” to the hoax pushing giant. And now that the dust has settled, it’s interesting to see AJ’s reaction, the reaction of his followers and the reactionary conspiracy spin Jones unleashed. After a full-scale “worldwide-web” ban on his bullying, hate and faux-news, Alex Jones wants you to imagine a world where the problem lies with others.

If you’re reading this… YOU ARE the Resistance!

Alex Jones would like you to believe everything InfoWARS pushes, pumps out and promotes to be “truth” from the bunkers. The truth is, InfoWARS is not some gritty, tiny, dirty (well… okay), information resistance bunker. InfoWARS is not an indie allt-news outlet with independent reporters and limited resources. InfoWARS is another mega-corporation. InfoWars is a corporate giant.

Jones and crew pulled in multi-multi-millions of dollars every year from the many resources available through the social sites he slammed daily. Some of these resources are schemes people may not even be aware of. Google AdSense and Facebook advertising revenue are only two sources. Minutes watched per YouTube video is another source of their income scheme, so why wouldn’t Jones put on a nightly circus freak show? The more outrageous Jones acted, the more he earned.

And now that the clicks have dried up on those fronts, InfoWars is feeling the resistance of cash flow. The corporate monster Alex Jones created and branded is desperate to keep the ship afloat. Now, more than ever, Jones needs strangers to buy products. InfoWARS has been pushing vitamins and supplements down their viewer’s throats even harder in the past 24 hours, more than ever. Bugout gear and T-shirt sales are at an all-time high. Alex Jones will literally sell you the shirt off his back to make a buck.

Prison Planet surprised to be in Internet jail?

Make no mistake… this is a well-oiled machine. InfoWARS nonsense was built to tickle the ears of their socially awkward followers and subscribers, then eventually spill into the lives of “sheeple” who are completely unaware of fake news propaganda. Prison Planet indoctrinated so many minds. Naive listeners were told to “wake up” daily. From cellar dwellers to former military-trained militia and everything in between, InfoWARS gunned for the heads of anyone and everyone, bragging about a war on the human mind. And now that so many people with a brain have woken up to this fool’s complete mockery of justice, Alex Jones begins his spin of “free speech” censorship. Instead of taking responsibility for his part in targeted harassment of victims and families in the mainstream news, Jones rants via internet radio how he is the one being targeted and harassed.

Jones claimed the Sandy Hook Elementary School shooting was fake, the kids were not real and did not die, the Parkland School shooting was a hoax, CNN does blue screen instead of traveling to the scenes of these crimes and so on. Alex Jones will play both sides of the fence. Jones does this, mainly, in hopes of appealing to everyone. He wanted people tuning in so he could strike a chord with each listener. AJ needed to be liked by all. When there is backlash, Jones pretends to be a man without an opinion, just stating what “others” told him or passed along.

Was Alex Jones REALLY booted from ALL social networking platforms?

No. Not that Social Media’s Most Wanted should link out to the products Alex Jones and InfoWARS shill for, but… let’s face the facts.

No, he was not banned or censored off the internet. InfoWARS was not taken off ANY of the social networking platforms and neither were the bogus products his company sells. Because Alex Jones went against the TERMS OF SERVICE, the Channels with that particular content were hit and came down… after years and years of abuse to a number of innocent people. InfoWARS and Alex Jones continue to make money through Google, Facebook, Instagram, Pinterest, YouTube, Twitter, etc.

If Jones was “CENSORED” and banned in a massive effort to destroy him for speaking the truth, why is he, to this very day and minute, allowed to remain on these very same sites to sell products?

Think of it this way: you’re attending a party at a friend’s house. Your friend understands how people drink, get out of control… depending on the parties you’ve been to, maybe people bring drugs, guns and might be there to crash the soiree? The host of the social gathering (foreseeing these elements), gives all party guests some “terms” before entering their home.

So, Alex Jones crashed the party! The idiot got raging drunk, did drugs, pulled his shirt off, punched holes into the walls of a couple bathrooms, took a crap on the kitchen counter and then… the cops showed up. AJ wants to fight for his right to party on platforms, nobody else. All the social sites who said, “No way!” may have hypocrites who smoke two packs a day, but they are not the Channels under review.

Of course Alex Jones will appeal to many people’s inner Beastie-side. However, when an individual goes against the owners of the house, the neighborhood watch, the homeland security and the local cops… they must answer for their behavior. And as Jones is cuffed and stuffed into the back of a paddy-wagon, he looks like a rager pointing fingers telling other guests of the party, “YOU’RE NEXT! YOU ARE NEXT!” – behaving just like an uncivilized goon.

This is what Alex Jones did to Facebook, Spotify, Twitch and especially YouTube. Also, the Channels and Pages and Profiles Jones dressed up nice in black ties, tailored, sharp-looking tuxedos? Those are his well-behaving shill products InfoWARS sells. Those accounts are up and accounted for.

Jones wants others to continue spreading his message of “free speech” and how he was “censored” off all platforms? How about he does it on the shill product accounts? He won’t, no way. Alex Jones will ask YOU to do it on your profiles though?

Fascinating! What a shill.

Not buying the lies… not buying a thing from InfoWARS

How is this shill company InfoWARS and their shillionaire leader Alex Jones getting away with such hypocrisy? When a politician they do not like or do not agree with has… let’s say a random politician has an affair, yes? It happens more than the public would like to know about. Does Alex Jones and everyone at InfoWARS think they let a breaking story of their lifetimes slip through the cracks?

These wannabe-legit “journalists” call for the cheating politician’s impeachment. They will set out to destroy and discredit them. The staff at InfoWARS, with the well-oiled machine, pump out stories, graphics, videos, articles… they sent in their bully news crew flunkies to try and get an embarrassing sound clip or video clip… anything. InfoWARS had relied on click bait schemes to pull as much money as they could from YouTube and Facebook videos.

Alex Jones needs to give us all a big fat break with this talk of censorship and witch hunt and his paranoia of “they’re coming for you next!” because as long as people are decent human beings, nobody (not even Alex Jones) is being “banned worldwide” for anything other than hate and there is no great conspiracy happening.

Some of the junk Alex Jones talks about is not even said in public, or if it is said in public, the thoughts are whispered, not screamed and ranted about the way he does.

From, a recovering former conspiri-tard…

I can tell you from experience, I know all too well about “hoaxing” and what really goes on behind the scenes. For my part in the so-called “Truther” movement, I did a tiny bit of damage which led to other damage I could not foresee. I have a tiny bit of movie experience and with that experience,

I was able to sync up some dashcams from the police cruisers video cameras that were at Sandy Hook Elementary School and make a video. I noticed how the Hoaxers seemed confused as to what they were looking at and by syncing one police cruiser’s video, Hoaxers were able to take my findings and spread their messages on YouTube as further evidence of a government coverup. Mostly YouTube.

I was clued into the real fact that a movie was being made about the Sandy Hook School shooting and I wanted to help. I assisted with the poster design and added a slew of names into the Internet Movie Database aka IMDb.

Names from Anderson Cooper, Nancy Grace, Dr. Wayne Carver, Megyn Kelly, Adam Lanza… even myself, Doug Maguire as “special thanks” along with many of the Sandy Hook families were added as “themself” and I thought I was doing something good and meaningful. Almost all the researchers wanted to remain hidden in the shadows, which did not make sense to me at the time! We were supposed to be uncovering something huge, right? Weren’t we blowing a conspiracy wide open, like Alex Jones?

Hoaxers trolling for dollars and confusion

In the end, I saw a number of my former hoaxing colleagues run to Alex Jones’ InfoWARS to be a guest on his program. With a movie listed as a “documentary” instead of as a MOCKING mocumentary… Jones believed the hype. He ran with it and the Hoaxers fed him disinfo. The disinfo spread and spread and spread into hundreds of thousands of views. Sheeple ran to IMDb to give the YouTube video a 10 Star rating, which added even more fuel to the fire.

I have since apologized to only one of the parents for my role in what did not need to be talked about. I know for a fact… for an absolute fact, Jones is not sorry. He made tons of money off the Sandy Hook hoax and when he does apologize for lending his name to the madness, it is a backhand slap in the face. He will throw up an “okay” sign, or a wink, or say how he can see how others view Sandy Hook as a hoax. It is never a full and sincere apology. 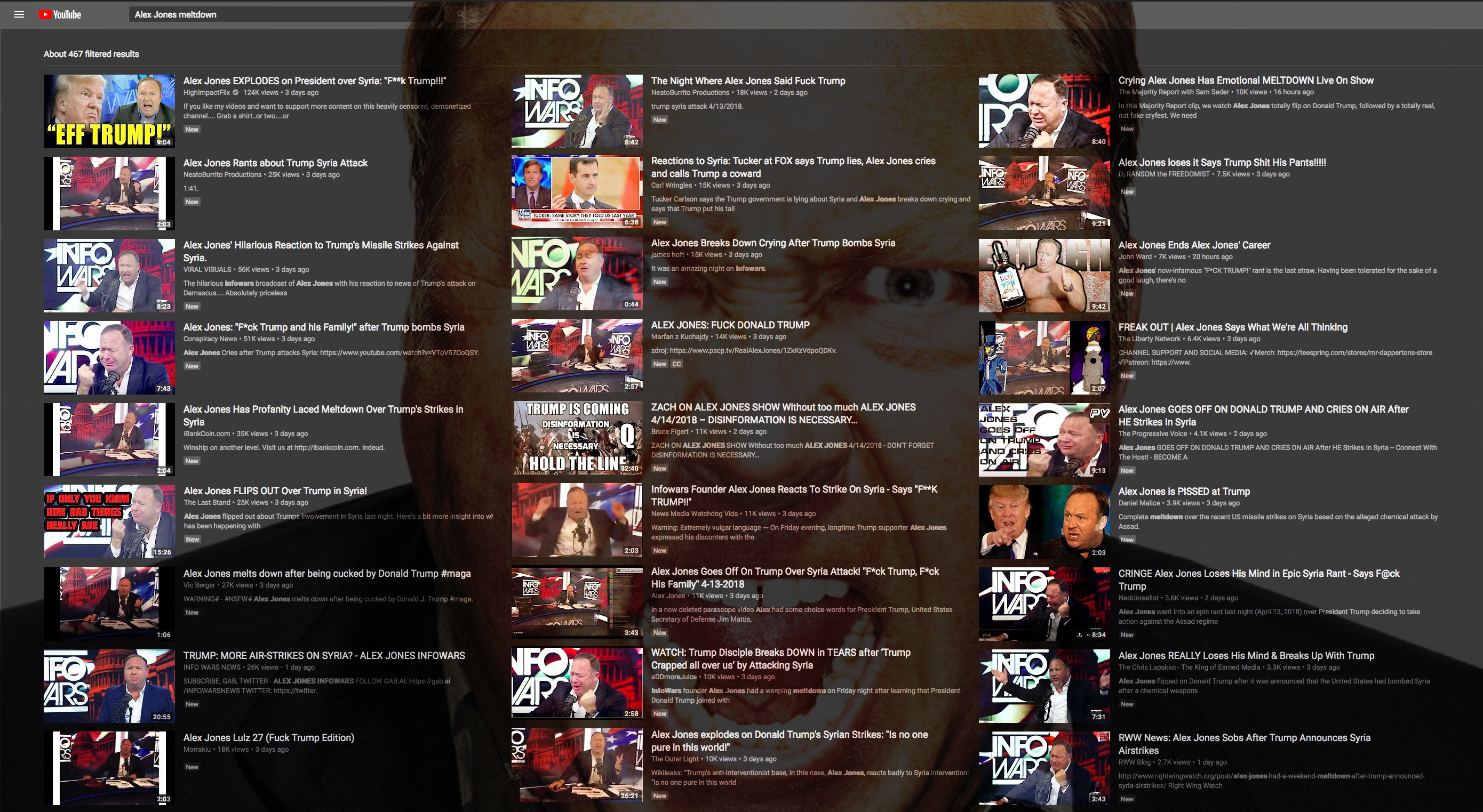 I am glad his hate has been removed in the same manner as mine was. I am not asking President Donald Trump to reinstate my garbage, neither should Alex Jones. Much of what I have done still remains against my will, but Alex Jones doesn’t care about what is right or wrong. He only cares about his well-oiled machine and his wallet.

In total, I have seen about 2-3 hours of Alex Jones clips. Could be a couple hours more that that? I’m not too sure. I’ve tried to stay away from that shill, but now… I’m into the trainwreck. I think it’s good to watch this idiot’s fall from disgrace.